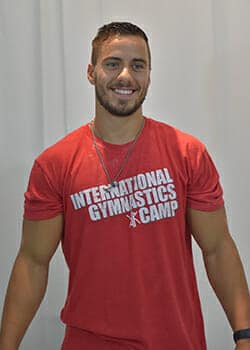 We are excited to officially announce that Olympian Jake Dalton will be at camp this summer!

Jake will be at IGC during week 1 of camp, helping kick off another amazing summer. After last year’s busy summer that concluded with the 2016 Rio Olympic Games, we can’t wait to have Jake back at IGC again for Summer 2017.

Jake Dalton is a 2-time Olympian, representing Team USA in both the 2012 London Games and the 2016 Rio Games. Jake is also a 4-time World Championships medalist.

A former University of Oklahoma gymnast, Jake’s NCAA achievements include 4 NCAA Championship titles and 13 NCAA All-American honors. In 2016, Jake had a Parallel Bars skill named after him, the Dalton, which is a roll backward with a 1⁄2 turn tucked to hang.

Jake is one of the ambassadors for IGC’s Kount on Kindness initiative.

Check out Jake in action, watch his vault from the 2016 Rio Test Event below!

We are thrilled to be hosting our legendary visiting coaches program during weeks 3, 4, 5, 6, 7, and 8 this season! Directors Abie Grossfeld, U.S. Olympic Hall of Fame Inductee, 3-Time Olympian, 3-Time Olympic Coach, and International Judge, and Phil Frank, Gymnastics Safety Certifier and club coach, work with coaches in informative and individually tailored sessions. In addition to the coaching sessions, our visiting coaches have the opportunity to enjoy some of IGC’s exciting recreation activities.

Learn more about our celebrity guests!