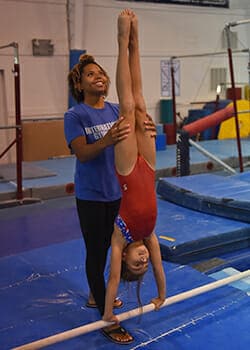 We are excited to have Brittnee Habbib at camp this summer. She will be joining us for week 5 at IGC. Brittnee’s encouraging spirit has always been a huge contributor to the positive atmosphere of camp.

Brittnee was a 2006 World Championships competitor for Canada and a 5-time Canadian National Team Member. Brittnee attended college at the University of Nebraska. During her time as a student-athlete, Brittnee earned an All American Honor and was the 2010 NCAA Regional Uneven Bars Champion.

Brittnee stars in the gymnastics movie Chalk It Up. Chalk It Up, also starring IGC Celebrities Maddy Curley and Tarah Paige, was filmed in the gyms of IGC. The movie includes many IGC staff members and local gymnasts as extras. Chalk It Up is now available on DVD to purchase here.

Watch Brittnee below as she competes on the Uneven Bars for the University of Nebraska.