IGC founder Bruno Klaus is in Berlin, Germany for the International Turnfest Competition. Turnfest is a huge and amazing event for all kinds of different sports. Bruno is very happy to be a part of it alongside his coach and friend, 1956 and 1960 Olympian and IGC legend Abie Grossfeld.

There are 70,000 participants from around the world gearing up for the International Turnfest Competition. There are 70 Turners representing the United States – including New York, Los Angeles, Louisville, Chicago and Denver.

Bruno will be competing in the 80+ division. Since he has arrived, he has been practicing his routines with Coach Abie Grossfeld. While practicing, he had a great workout and even did his best kip yet!

Today there was also a parade that Bruno and Abie marched in with the American Turners New York. The group had a great time, and it got everyone excited for the week ahead! 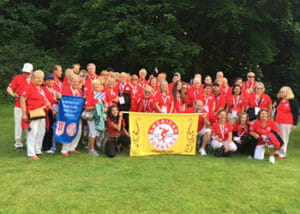 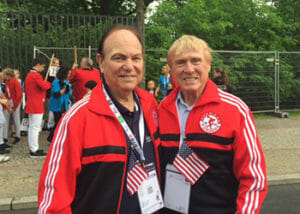 Bruno and the New York Long Island Turners getting ready to march in the parade;     Bruno and Abie at the parade

The competition begins today. We are rooting Bruno on every step of the way, and wish him all the best of luck!

Before the competition, Bruno and Abie were interviewed on German television about the importance of gymnastics and staying healthy and fit.

Bruno scored a 7.7 on his low high bar routine: glide kip to drop kip to back hip circle to underswing dismount, and an 8.6 on his straddle vault!

Click this link here to see a glimpse of Johanna Quaas’ routine at the International Turnfest. At the 1:24 mark and on, you will see short clips of Bruno and Abie being interviewed for German TV!

Bruno is continuing to have a wonderful time. He is well-rested after his competition and meeting lots of old friends! 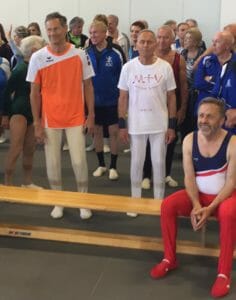 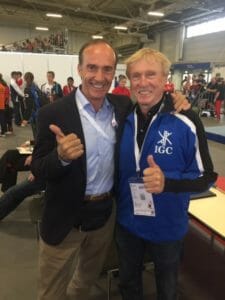 Bruno and his group lined up for competition / Bruno with Eberhard Geinger, 1972 and 1976 German Olympian and visitor to IGC!

The competition has now concluded and Bruno had an absolutely amazing time! He was very happy to be there and we are all so proud of him! He enjoyed being able to reconnect with some of his old friends again and have fun doing what he loves- gymnastics. We are looking forward to having Bruno back in Pennsylvania again early next week and throughout the rest of the summer!