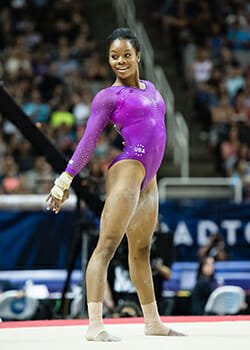 We are so excited to announce that 3-time Olympic Gold medalist Gabby Douglas will be joining us this summer at IGC!

Gabby will be at camp during week 1 and week 10. This will be Gabby’s first time at IGC, and we know that our campers are going to learn a lot from her inspiring story!

Gabby was a member of the 2012 Olympic Gold medal winning team, “The Fierce Five”, who won the second-ever Olympic Team Gold medal for the US. Gabby went on to win the individual All-Around medal during that same Olympic Games, making history by becoming the first African-American gymnast to win the title. In 2016, Gabby and her “Final Five” teammates went on to defend the USA Team title at the Rio Olympic Games.

Gabby was named the 2012 Associated Press Female Athlete of the Year, is a 2013 and 2017 USA Gymnastics Hall of Fame Inductee, and is the author of two books.

We are thrilled to have this amazing athlete at IGC this summer!

Learn more about our guests by visiting our Celebrity Guests page or reading more of our blog!