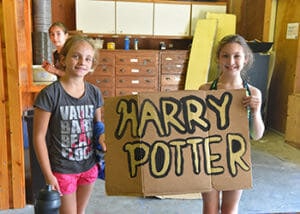 The much-anticipated Harry Potter Week at IGC was as wonderful and magical as one could imagine! When we first started planning our summer themes of the week, we were extremely excited for all of them. However, there was one that stood out in particular—Harry Potter Week! It was the newest summer theme, and it certainly did not disappoint!

Before campers and their families even entered our gates for check-in, the tone for Harry Potter Week was instantly recognized. Our staff members at registration were dressed up to greet guests in Gryffindor ties, as well as the instantly recognizable Harry Potter glasses and robes. There, campers and families found out which of the four “houses” they would be staying in for the week (Gryffindor, Hufflepuff, Ravenclaw, or Slytherin). 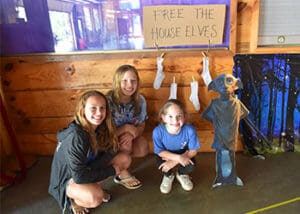 The IGC campus had officially made a magical transformation into Hogwarts! Campers and families entered to the charming tunes of the Harry Potter soundtrack, and immediately came across the Hogwarts Express Train and Platform 9 ¾. There were special touches everywhere throughout camp, including pops of color to represent all four houses, broomsticks and golden snitches, floating candles, acceptance letters, Dumbledore, the Tri-Wizard Cup, one of the most beloved house elves, Dobby, and much more!

Many campers came well-prepared and brought themed outfits, props, and pet owls along with them, which added to the camp magic! During the week, campers had plenty of opportunities to participate in Harry Potter themed games, and arts and crafts.

When campers were training in the gyms, they were able to work alongside our amazing Week 3 IGC celebrities. We are always happy to welcome back Oksana Chusovitina, Jim Hartung, and Ivan Ivankov to camp each year. Our campers were very excited they were able to meet these amazing gymnasts and learn about each of their respective careers.

Harry Potter Week was an enormous success, and we are looking forward to bringing this theme back in the future!