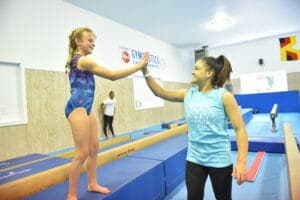 The stars were completely aligned during Hollywood Week at IGC! Week 2 was a fantastic week, but sadly, it is coming to an end.

One of the biggest highlights of Week 2 were without a doubt our IGC Celebrities, which set the perfect tone for Hollywood Week! Our campers went wild for Laurie Hernandez, Jana Bieger, Steve Legendre, Maddy Curley, and Tarah Paige. 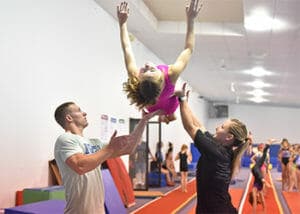 Jana, Steve, Maddy, and Tarah have been coming to IGC as celebrities for many years, whereas this was Laurie’s very first time at IGC! Laurie received a warm welcome from all of our campers and staff, and was extremely happy to be here for her first time. All five of our Week 2 celebrities had an amazing week working with the campers. From getting to interact with them in our 5 gyms, to teaching them new gymnastics skills, to signing autographs and taking photos with them, it was nothing short of an amazing week. 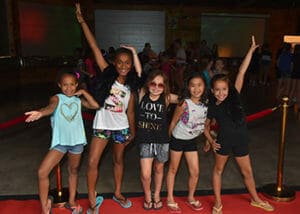 Another huge highlight was Thursday night, with the weekly camper dance in the canteen. The canteen was perfectly decorated to complement all things Hollywood, complete with a photo booth and a red carpet. The campers dressed up in their finest attire and enjoyed dancing the night away. Gymnasts turned movie stars, Maddy Curley and Tarah Paige were a huge hit with our campers at the dance. They both starred in the gymnastics films Stick It and Chalk It Up. Chalk It Up was filmed right here at IGC!

Everyone had a really great time, and many campers are already talking about how excited they are to come back next year!

As for now, it’s a wrap on Week 2! Next week is guaranteed to be magical as IGC transforms into Hogwarts for Harry Potter Week!