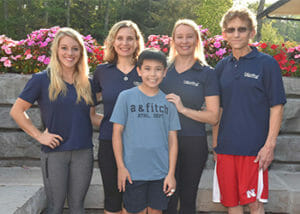 We are very glad to announce Olympic gold medalist Jim Hartung will be at camp this summer! Jim will be at IGC for weeks 3 and 4.

Jim has had an extremely successful career as a gymnast. He began gymnastics at a young age and immediately fell in love with the sport. Having competed for the University of Nebraska, Jim is one of the school’s most decorated gymnasts. He is a 7-time NCAA Champion, a 22-time All American, and helped lead his team to 4 National Championship titles. In 1982, Jim received the highest Men’s Collegiate honor, becoming the Nissen Emery Award winner. This award is given out to the best male collegiate gymnast in the country every year. It was also the first time someone from the University of Nebraska won this prestigious award.

Jim was a member of the 1980 US Olympic team. However, the team did not compete due to the boycott. He went on to compete in the 1984 Olympics in Los Angeles, where he and his team won the Team gold medal.

We are so excited to have Jim here with us for a couple of weeks this summer! He is very inspiring to many, and we can’t wait for our campers to learn from him.

Check out Jim’s awesome routine on high bars at the 1984 Olympics below!