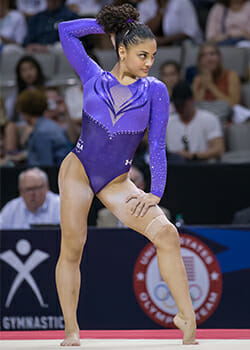 Laurie Hernandez, Olympic gold and silver medalist and member of “The Final Five,” will be at IGC this summer!

We are thrilled to have Laurie at camp during week 2. This will be Laurie’s first time at IGC, and we know she will be a real joy to have on campus working with our campers.

Laurie stole hearts worldwide in the summer of 2016 with her enthusiastic personality and upbeat performances at the Olympic Games in Rio. Along with her teammates, Laurie helped the US win gold in the team competition, and secured her own silver medal finish on Balance Beam.

In addition to her Olympic achievements, Laurie is a New York Times Best Selling Author with her book I Got This: To Gold and Beyond. She is the “Dancing with the Stars” Season 23 Champion, 2017 Jefferson Award Winner, 2017 Hispanicize Award Winner, and a 2017 USA Gymnastics Hall of Fame Inductee. At the age of 16, these are just some of Laurie’s many accomplishments.

We are honored to have such an incredible role model at IGC this summer!

Learn more about our celebrity guests at IGC by visiting our Celebrity Guests page or reading more of our blog.