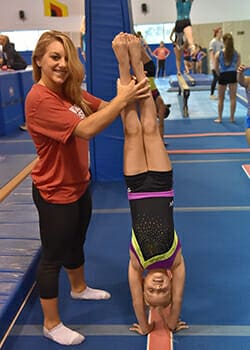 Samantha Peszek has officially signed on for week 6 of camp this summer at IGC! The Beijing Olympian is another returning IGC Celebrity and the fourth Olympian so far announced for Summer 2017. We are very excited to have both Samantha and Nastia Liukin at camp during the same week (week 6), as they were teammates on the 2008 silver medal winning Olympic team.

Samantha is an Olympic Silver Medalist and a World Championships Gold Medalist. Following her elite gymnastics career, Sam became a 3-time NCAA Champion and 17-time NCAA All American for the University of California, Los Angeles (UCLA). Currently, Samantha is a commentator for the Pac-12 Network’s NCAA gymnastic coverage.

With all of these amazing accomplishments, Samantha has a wealth of experience to share with IGC campers!