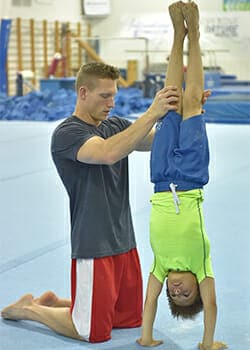 We are excited to announce that 2-time World Championships medalist Steven Legendre will be at IGC this summer! Steve has been confirmed for weeks 1, 2, and 9 of camp. We love having Steve at IGC. He is always a huge contributor to the energetic camp atmosphere!

In addition to being a 2-time World Championships medalist, Steve is a 4-time National Champion and was an alternate for the 2012 Olympic Team. Steve attended the University of Oklahoma as an NCAA gymnast. During his time there, he earned 6 NCAA Championship titles and 12 All American honors. Steve was the 2011 Nissen Emery Award Winner, an honor presented each year to the top male collegiate gymnast in the country.

Steve is currently in his second season as an Assistant Coach for the University of Oklahoma.

Check out Steve in action, competing on Vault at the 2010 VISA Championships.