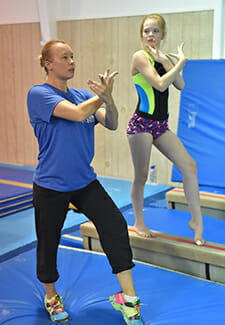 We are so excited to announce that 3-time Olympic gold medalist Svetlana Boguinskaia and 7-time Olympian Oksana Chusovitina will be joining us this summer at IGC.

Svetlana is a 3-time Olympic Gold medalist and a 9-time World Championships medalist. Svetlana has competed in the Olympics for the Soviet Union, the Unified Team, and Belarus, making her one of only two gymnasts to compete for three different Olympic teams (the other gymnast being Oksana Chusovitina). Svetlana is famous at IGC for running a fun and challenging Balance Beam warm-up for campers, always featuring some of her signature dance moves.

Oksana is an Olympic Gold Medalist and 3-time World Champion. She currently holds the world record for being the first female gymnast to compete in seven consecutive Olympic Games. Oksana has competed in the Olympics for the Unified Team, Germany, and Uzbekistan. One of the highlights from last summer was having Oksana train for her seventh Olympic Games in the IGC gyms. Our campers had the once-in-a-lifetime opportunity to train alongside an Olympian during their stay at camp!