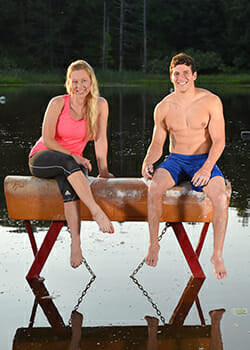 The power couple is back!

2016 Olympic medalist Alex Naddour and World Championships medalist Hollie Vise will be at IGC this summer! The husband and wife duo will be at camp during weeks 6 and 7. Both Alex and Hollie bring amazing energy to the gyms, and we are so excited to have them working with our campers this summer!

Alex was a member of the 2016 Rio Olympic Team, taking home the Bronze Medal on Pommel Horse. Alex is a 2-time World Championships medalist and a 4-time National Champion. Attending the University of Oklahoma, Alex became a 2-time NCAA Champion and a 5-time All-American.

Alex is still currently training. He competed in the 2017 Winter Cup Challenge, taking home the Gold Medal on Pommel Horse and the Silver Medal on Still Rings.

Hollie Vise is a 2-time World Championships Gold medalist and a 3-time NCAA All-American for the University of Oklahoma. Hollie is currently a girls’ gymnastics coach at USA Illusions in Gilbert, Arizona.

During their time as Oklahoma student-athletes, Alex and Hollie met and began dating. The two married in May of 2015 and welcomed their first child, Lilah Kate Naddour, in February 2016.

We’re so excited to have them as part of our celebrity IGC family. Browse through camp dates as well as our celebrity guests page to decide which weeks your child wants to attend gymnastics summer camp!