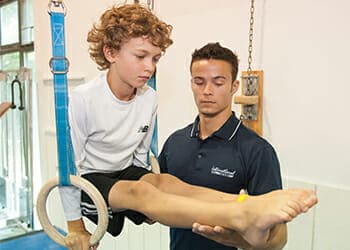 We are happy to announce that 2014 World Championships medalist Paul Ruggeri will be joining us this summer at IGC!

Paul competed in NCAA gymnastics for the University of Illinois, earning 5 NCAA Champion titles and 9 NCAA All-American honors. During his senior year at the University of Illinois, Paul helped lead his team to win the 2012 NCAA National Championships title, their tenth Championship title and their first since 1989. That same year, Paul was awarded the Nissen-Emery Award, an honor presented each year to the top male collegiate gymnast in the US.

Each summer at IGC, Paul brings his expertise as an athlete and a coach to help motivate, inspire, and mentor our campers. We are so excited to have his fun and positive attitude back at IGC this summer!

Check out Paul showing off the quadruple twisting double back during a Staff Exhibition last summer!